Isabel Ling, Artsy, November 15, 2022
Open a larger version of the following image in a popup:

The Artsy Vanguard is our annual feature recognizing the most promising artists working today. The fifth edition of The Artsy Vanguard features 19 rising talents from across the globe who are poised to become the next great leaders of contemporary art.

When she was in elementary school, Maria A. Guzmán Capron raided her parents’ closets, demanding they donate to her their dress shirts and even a trench coat—all too many sizes too big for young Guzmán Capron—so she could reinvent her wardrobe.

“From an early stage, I understood that clothing allowed you to construct a different kind of persona for yourself,” said the Oakland-based artist in a recent interview with Artsy. “In choosing what you wear, you can make yourself.” Now in her early forties, Guzmán Capron incorporates this sensibility into her art practice, creating soft sculptures out of found textiles and collaging together patterns and textures to form exuberant, otherworldly figures. 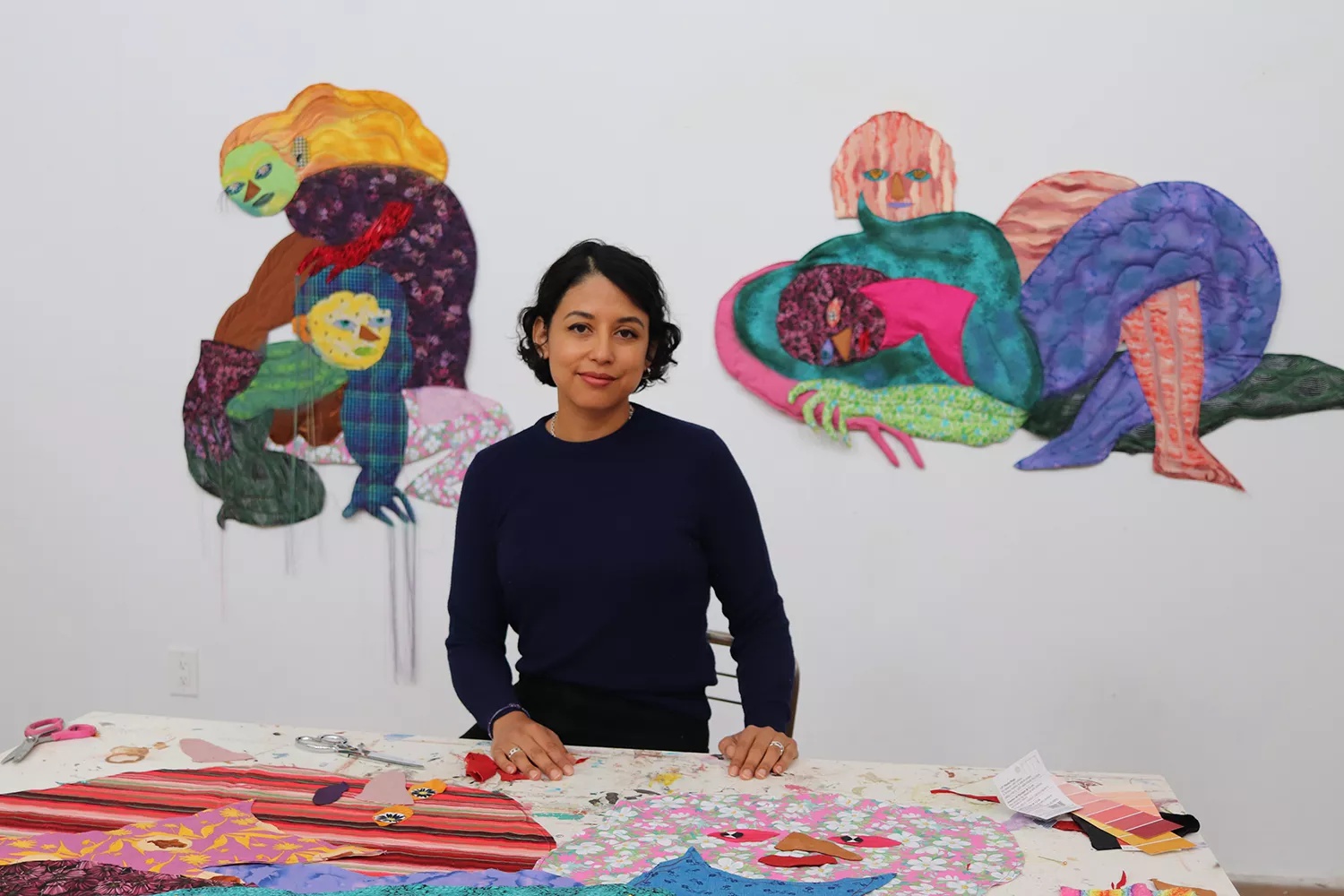 Guzmán Capron’s distinct narrative style has found resonance with galleries and institutions alike, with museums like Texas State Galleries and Blaffer Art Museum staging solo exhibitions of her work. More recently, Guzmán Capron was one of five recipients of the San Francisco Museum of Modern Art’s 2022 Society for the Encouragement of Contemporary Art (SECA) Art Award, which is awarded to emerging artists in the Bay Area. A new group exhibition featuring Guzmán Capron’s soft sculptures will be on view at the museum in December of this year.

She has also garnered the attention of the Fine Arts Museums of San Francisco (FAMSF), which acquired her work and that of 29 other local artists following a $1 million donation from the Svane Family Foundation. The new additions to FAMSF’s permanent collection will be exhibited at the de Young Museum in 2023. 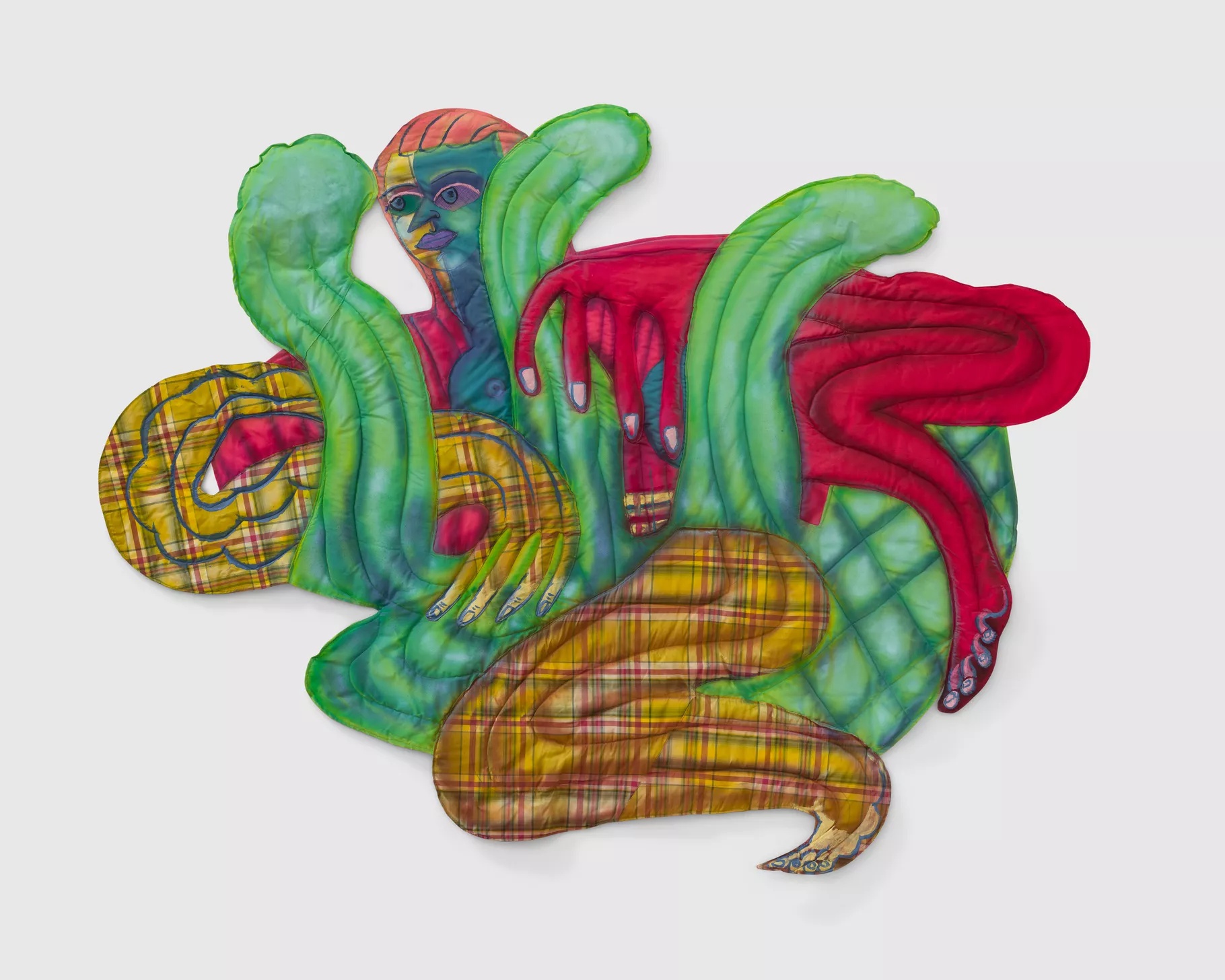 COURTESY OF THE ARTIST AND SHULAMIT NAZARIAN, LOS ANGELES.

Mischievous and intimate, taunting and flirtatious, Guzmán Capron’s avatars are larger than life, their dynamism a challenge posed to the confines of identity. In Duo (2021), which was featured in the artist’s first exhibition with her Los Angeles gallery Shulamit Nazarian, two figures are caught wrestling. Their body parts—represented in swathes of checkered cotton, airbrushed silks, and repurposed florals—are abstracted and entangled to the extent that their forms become indistinguishable from one another.

At the seams where the different fabrics merge, loose threads hang long, invoking an unraveling that further blurs the boundaries of the corporeal. Across her practice, Guzmán Capron is often drawn to representations of pairs and multiples. Her scenes of conflict and reconciliation between characters appear to be mirrors of one another, a reflection of her own experience negotiating multiculturalism’s dualities. 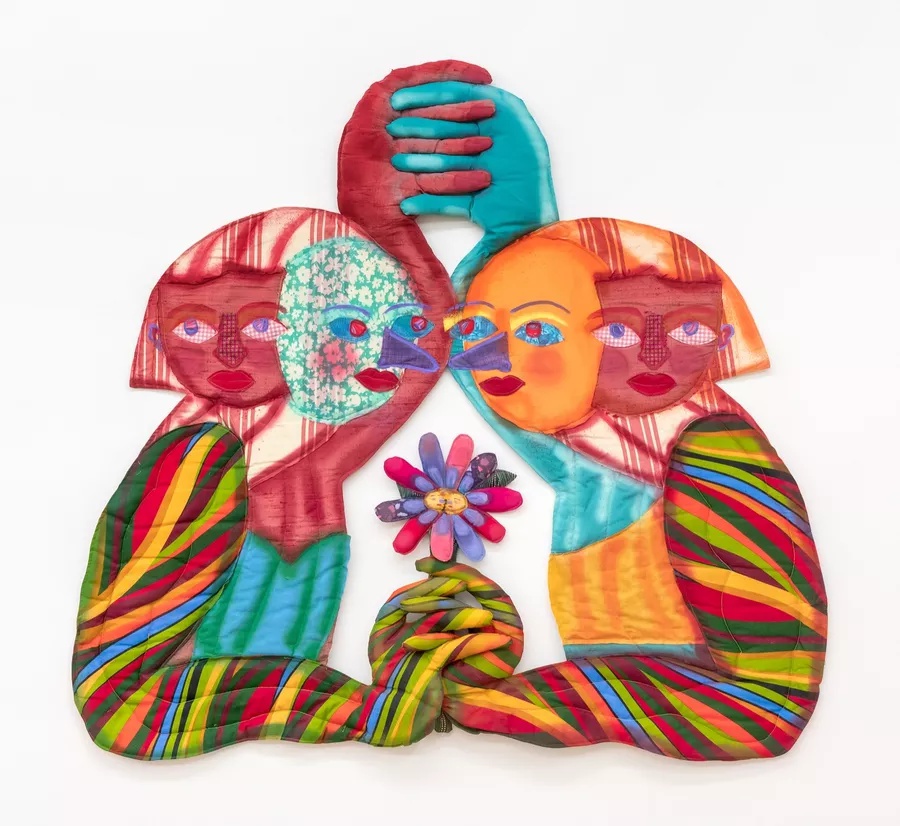 Born in Italy to Colombian and Peruvian parents, Guzmán Capron moved from Milan to Bogotá at age 14 before relocating to the United States at 16, where she has lived ever since. “I’ve always felt foreign in every context,” said the artist, referring to her experiences toggling between geographies and cultures. “My work centers around creating a sense of belonging. It’s a process of making a home for myself.”

Guzmán Capron first began experimenting with textiles at the University of Houston, where she received a BFA in painting. Inspired by the rich landscape of patterns and colors offered in the secondhand clothes and fabrics she found in local thrift stores, she began incorporating recycled textiles into her practice, even learning to sew in the process. She continued this work at California College of the Arts, where she graduated with an MFA in 2015. 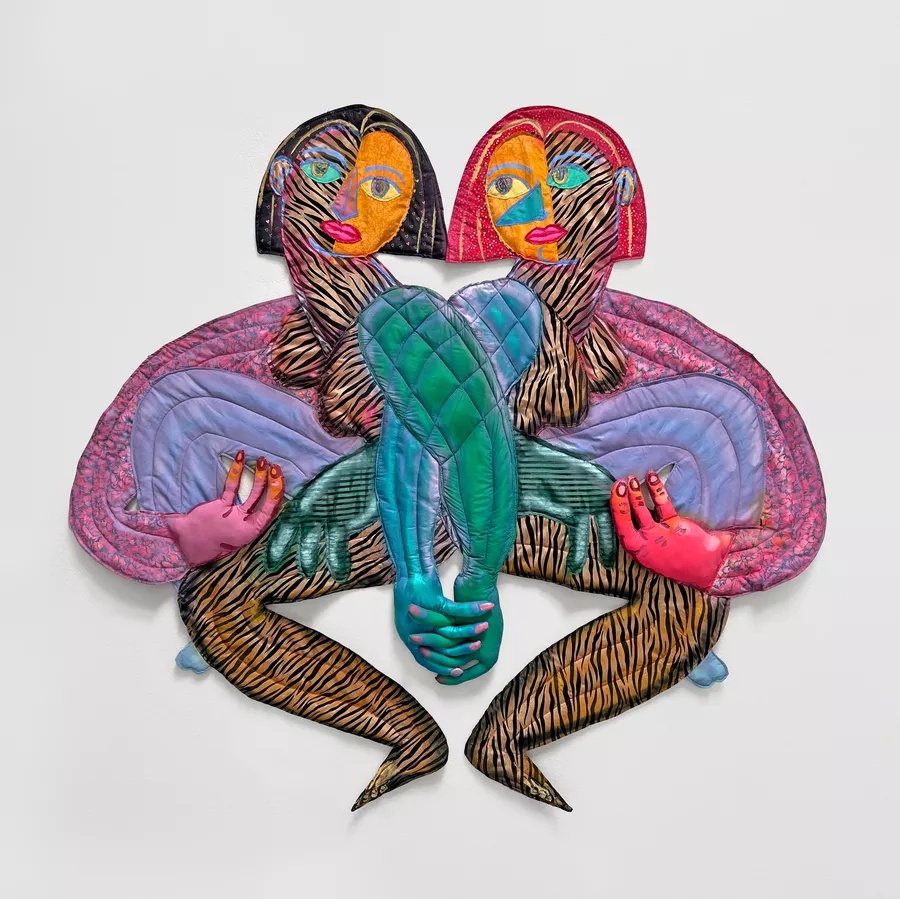 The evolution of Guzmán Capron’s practice has been molded by her time in the Bay Area, where she has resided for almost a decade. She credits the region’s Latinx communities and its history of embracing craft for influencing and nurturing her art. 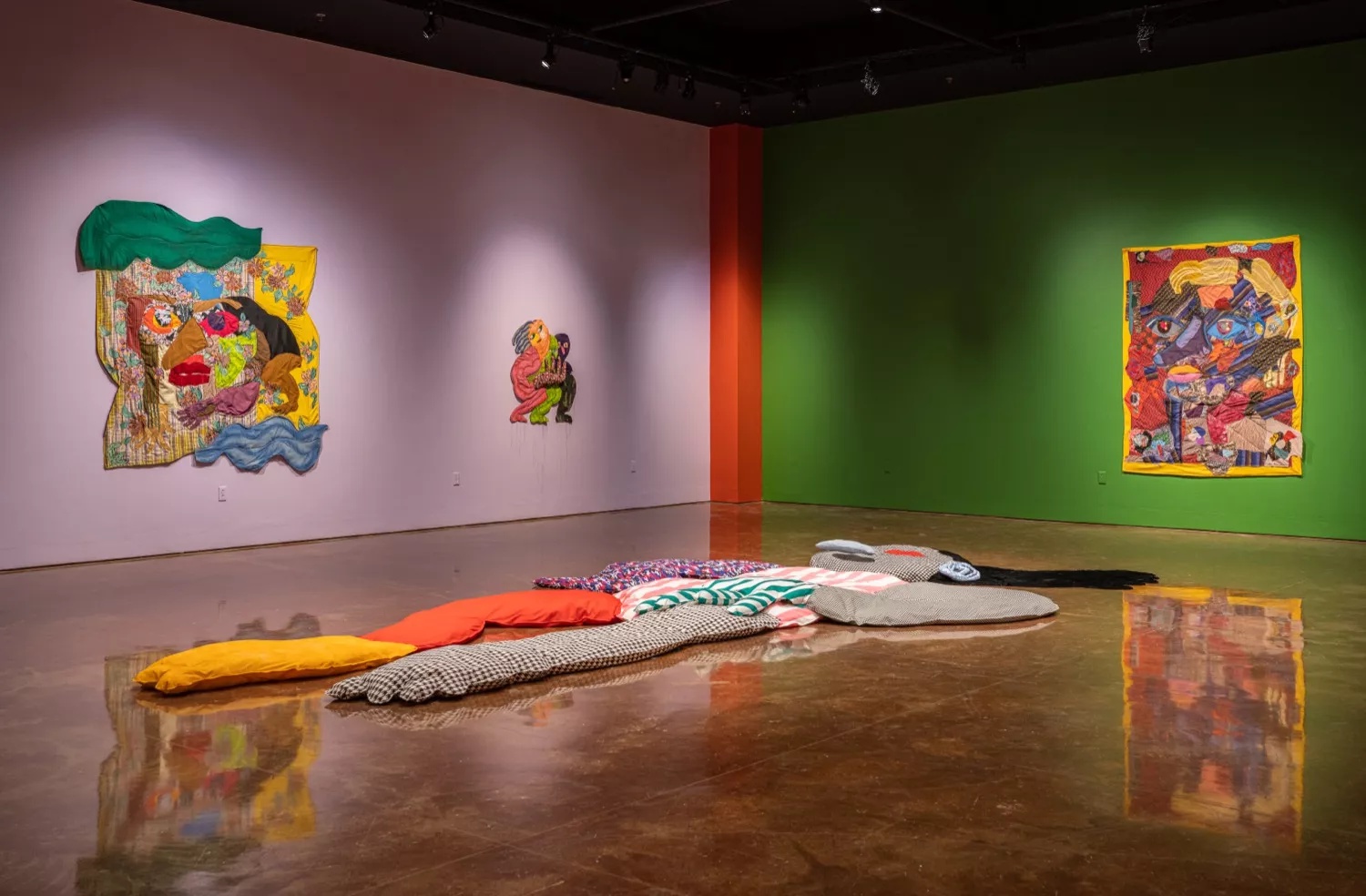 “A lot of the questions I seek to ask through my work, I’ve been asking since I was a child in what felt like isolation,” Guzmán Capron reasoned. “But as a part of a larger Latinx community, and in having these conversations around gender and culture, I’m learning we all have these questions and are finding the language to identify it together.” Creating her own context, she forms new mythologies and visual languages in her oeuvre to populate the limbo of her immigrant experience.

Playing with shape and dimension, Guzmán Capron presents viewers with a sensorial feast. At “Olas Malcriadas,” her 2021 solo exhibition at Texas State Galleries, the walls were painted vibrant hues. “My work is all about color,” Guzmán Capron said. “It felt incomplete to exhibit simply on white walls.” Sprawled across the exhibition floor was a sculpture, Mar (2021), which measures over 20 feet long, unfolding like a giant rag doll. Its massive scale transforms the artist’s recognizable, undulating silhouettes into a landscape. Enveloping and pillow-like, the piece is an invocation of touch and, ultimately, an invitation for connection. 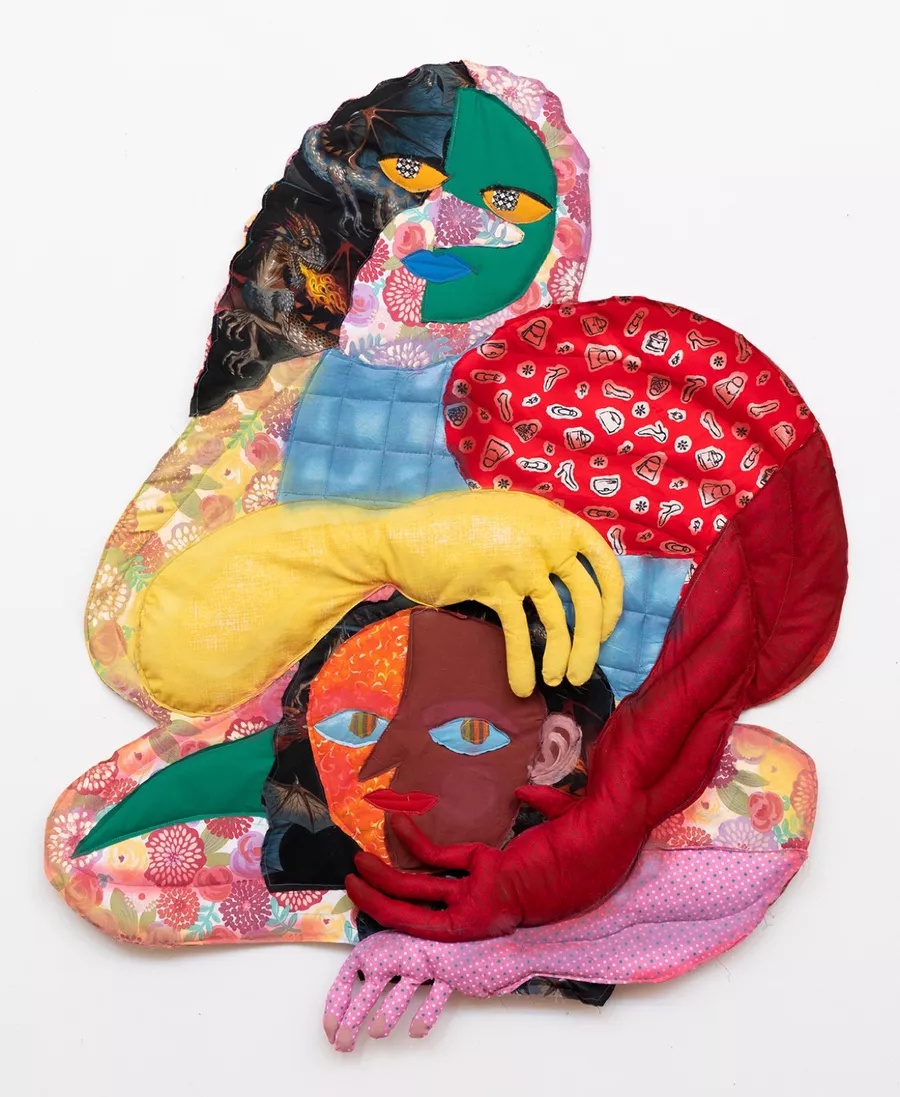 Maria A. Guzmán Capron, Me Contuve, 2022. Photo by Sarah Flora. Courtesy of the artist and Shulamit Nazarian, Los Angeles.

This tactility appears throughout Guzmán Capron’s work, particularly in the artist’s depiction of hands. Stuffed with batting, fingers and hands protrude from works like Enamorada (2022) to draw attention to a tender caress. Meanwhile, Me Contuve (2022), which was recently acquired by FAMSF, features a femme figure cradling a smirking, bodiless head in her hands. For Guzmán Capron, softness is used as a mechanism to not only bring an awareness to the body, but also to the binaries that often dictate how a body moves through the world.

Guzmán Capron’s work is an exercise in world-building. Through her exaggerated characters, she prods viewers to imagine an alternate reality. “I think of them as super-human,” she said of her avatars. “The physicality of their proportions [and] their muscularity [are meant to convey] that, as beings, they see the binary and they are asking for more, for something beyond.” 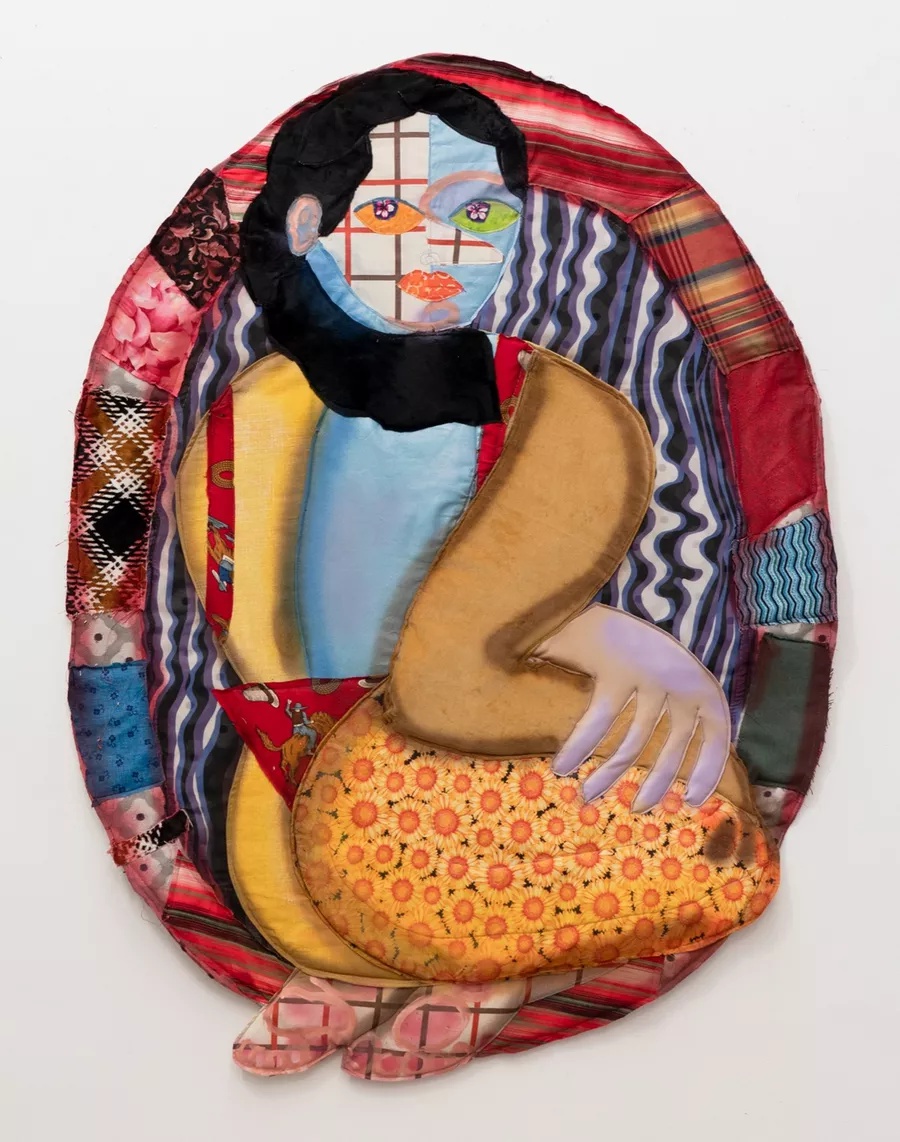