Art Basel: A glitch in the patriarchy: how Naama Tsabar is hacking the history of rock music

Using smashed guitars and holes in the walls, the Israeli artist is turning Miami Beach's contemporary art museum into an extended musical instrument

On February 6, 2021, indie rock musician Phoebe Bridgers performed on Saturday Night Live. The singer-songwriter finished the distorted crescendo of ‘I Know the End’ by banging her guitar against a monitor. The guitar didn’t break and the sparks that sprayed from the monitor were stage magic – ‘They made me a fake one to break,’ Bridgers said later – and the internet lit up in response. The trolling included comments like, ‘Guitar: 1, Phoebe: 0.’

For Naama Tsabar, an artist whose forthcoming show at The Bass Museum of Art in Miami, titled ‘Perimeters’, includes a body of work made from broken guitars, this ordeal brings to mind her 2008 durational performance Untitled (Babies), for which the artist created an unbreakable, carbon-infused guitar. It was smashed repeatedly into a wooden stage until the stage splintered and was ultimately wrecked.

‘When I started my research I couldn’t find any images of a woman breaking a guitar,’ Tsabar says. Then and now, as with Bridgers’ performance, Tsabar’s piece drew jeers from a mostly male crowd, commenting on her ‘inability’ to destroy the guitar. And yet, despite this parallel, Tsabar isn’t all that excited by Bridgers’ gesture. ‘For me breaking a guitar is such a cliché act in rock’n’roll,’ she says. ‘It’s interesting that [Bridgers] did it, but I’m not into it, necessarily. Maybe a woman needed to do that just to insert it into some sort of historic timeline.’ 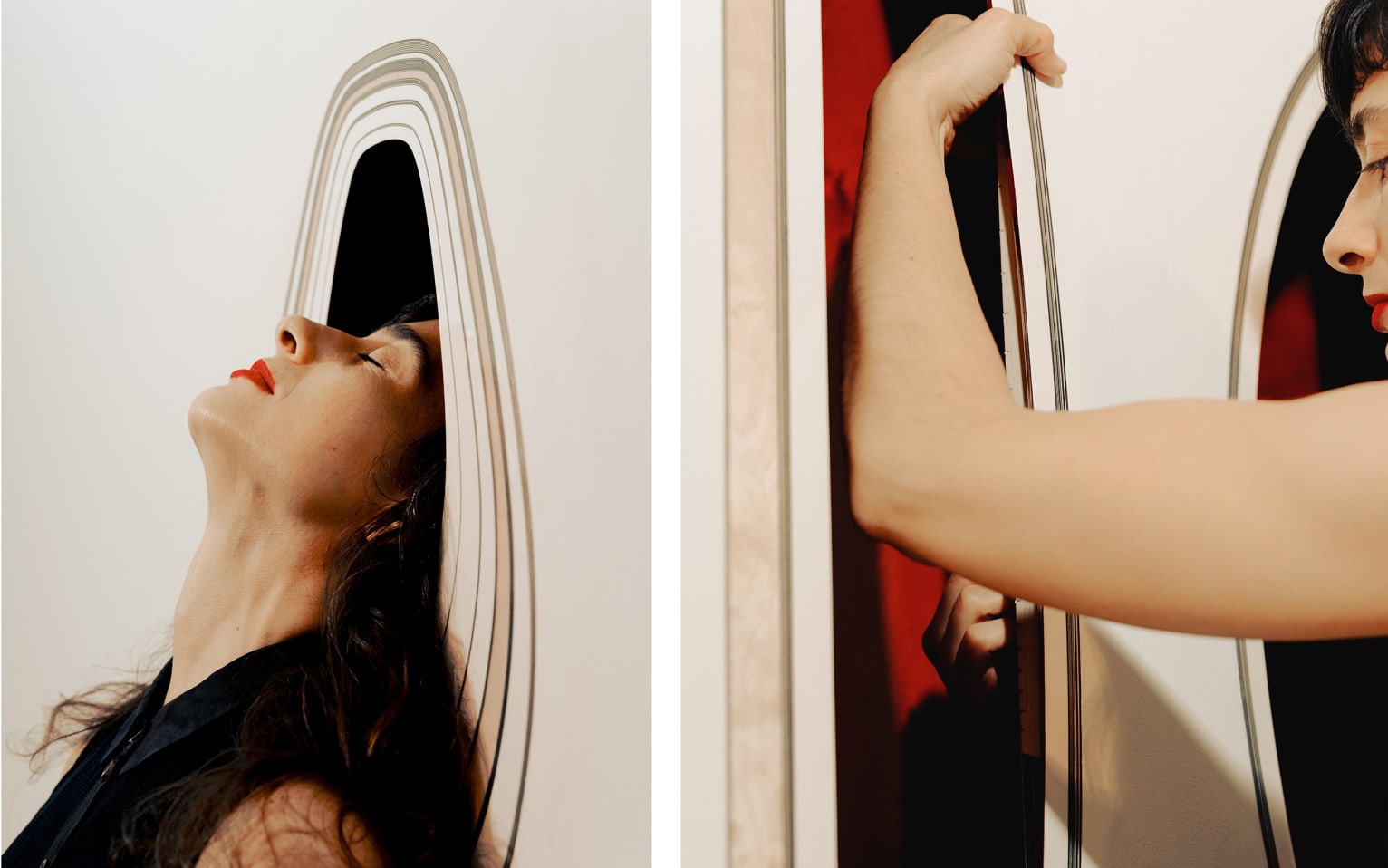 Tsabar’s exhibition at The Bass includes works from ‘Melody of Certain Damage’, an ongoing series. For these works, Tsabar smashed guitars in her studio, then mapped the spread of debris, and will have them fastened to the floor in exactly the same pattern. The broken pieces will be strung with guitar and piano strings in a nonstandard setup with nonstandard tuning. While showing me these works, Tsabar mentions how The Who’s Pete Townshend, credited with being the first musician to break a guitar on stage, was inspired by Gustav Metzger, the German artist and activist who developed the practice of auto-destructive art in the 1960s. This little-known intersection of contemporary art and rock history fascinates Tsabar, who is more interested in what comes after the physical act of destroying the guitar than the act itself. ‘I don’t call them guitars anymore, so they kind of transition out of that instrument order into a new one that has its own set of rules,’ she says.

Tsabar was born in Tel Aviv in 1982 and grew up listening to artists such as PJ Harvey, Patti Smith, The Breeders, Tori Amos, Björk, Sinéad O’Connor, and especially Diamanda Galás, a soprano and visual artist committed to Aids activism and other political causes. Tsabar started playing piano and guitar, and in high school had a teacher who, she says, ‘opened my mind about how art can be a concept. You can think about it as a bigger system.’ Around this time, Tsabar also started playing in bands and performing in clubs. In the 1990s, she says, ‘a lot of bands were exploring noise within the structures of pop’ – groups including The Prodigy. This drew her into ‘more extreme work’ by the likes of John Cage and Philip Glass.

In 2010, Tsabar received her MFA from Columbia University and was included in that year’s ‘Greater New York’ show at MoMA PS1. Since then, her work has circulated around many of the world’s top institutions and fairs. Tsabar’s exhibition at The Bass also contains a piece titled October 13 2019 – July 5 2021 [2021]. A pair of Cole Haan shoes that the artist wore during the title’s time period are fitted with a metronome that clicks away at about 60 bpm, the rate of a healthy human heart at rest. Further down the exhibition hall, a giant curved wall appears, which Tsabar refers to as a ‘nocturnal veil.’ Long thin strips of black on the wall produce a hypnotic, painterly effect – surprising, since it’s simply rolls of gaffer tape. ‘The material itself,’ which is used in stage productions to bundle and secure cables and mark positions, ‘is supposed to be hidden. It’s the labor that you don’t see when you see a show,’ she says.

Another body of work in the show is a series of beautiful and ambitious pieces Tsabar calls ‘Inversions’. Employing the concept of sound holes – the openings in instruments – Tsabar carved out cavities in the museum’s walls. Delicate violin inlays in maple are embedded flush with the walls. When a visitor passes a hand into one of the inversions, the act triggers a sound piece consisting of cicada field recordings and vocals by Wolf Weston and Rose Blanshei; parameters are manipulated depending on the hand’s movement. In another inversion, a fretboard with guitar and piano strings is installed behind the wall as a hidden instrument that can be played like a normal guitar, except you cannot move or see it. 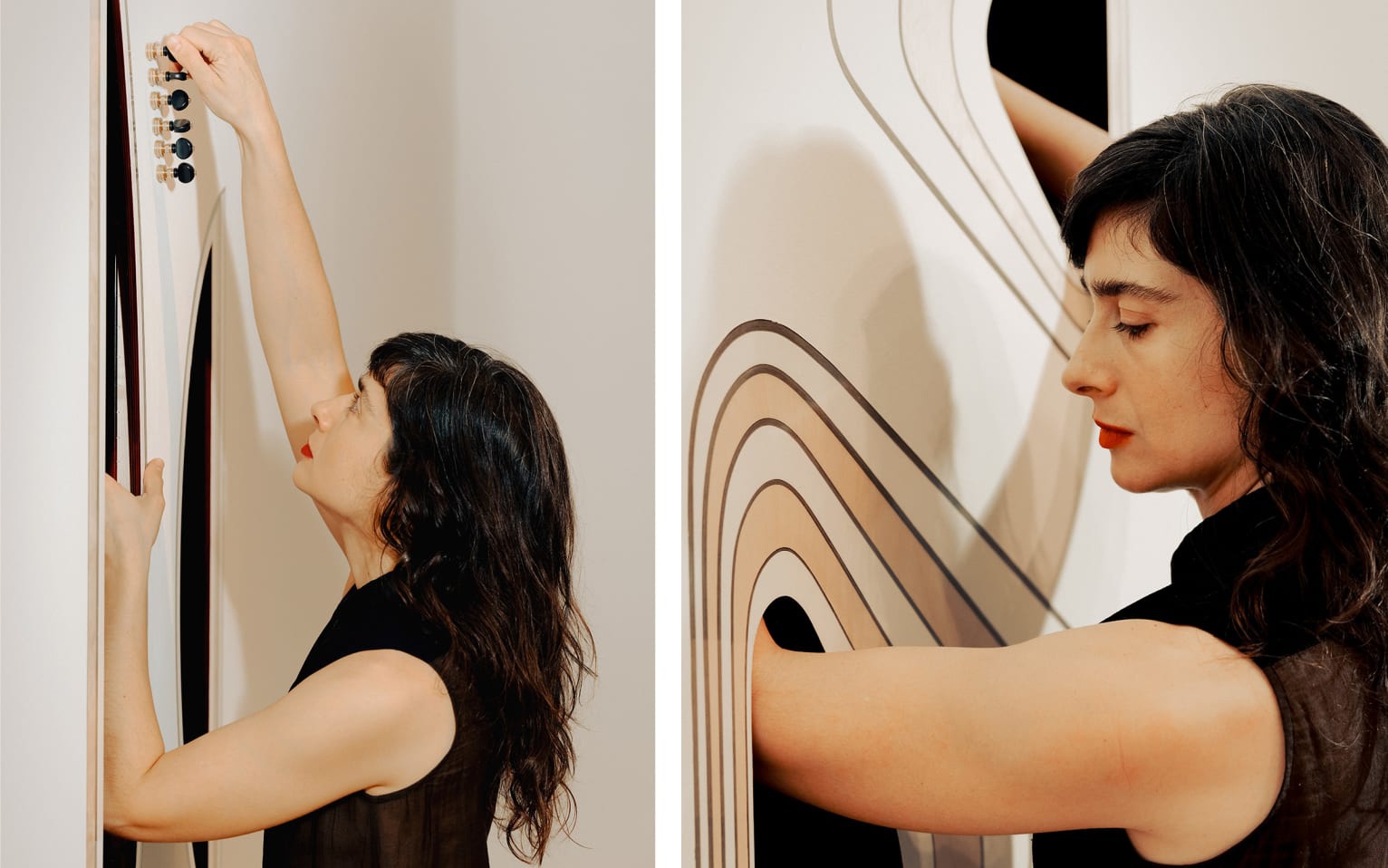 Tsabar’s Minimalist works convert the museum into a giant, multipurpose instrument, turning the surrounding architecture into large-scale extensions of the works. Her interest in concealed labors and spaces – often employed to hide the true costs of aesthetic production and display – come from a personal sense of her position in society as a queer woman. ‘I feel like these are places I can really relate to, where you’re part of a structure. You’re there but you’re not seen or considered,’ she says.

Rather than the spectacle of breaking a guitar – once a subversive act, now repeated ad nauseam by many a male musician – Tsabar is interested in exploring less-aggressive gestures. ‘What do you do with the violence and the destruction, rather than just breaking another [guitar] and propagating it further?’ she asks. At her exhibition at The Bass, Tsabar will try to answer this by allowing the audience to play her broken and reconstructed guitar works and the walls-turned-instruments. They will also be activated by a small group of local artists, all of whom are women or gender nonconforming, in a series of scheduled performances. The show’s title references Tsabar’s interest in power existing at the periphery of society, and one of the ways that power gets asserted is through sound. Female voices in particular, Tsabar says, have functioned as a sort of Trojan horse throughout history, one that can smuggle power to those on the outside. ‘They were expressing themselves under the cover of melody and beauty,’ she says, ‘almost like a glitch in the patriarchy.’

Perimeters is on view at The Bass Museum of Art from November 28, 2021 to April 15, 2022. Shulamit Nazarian, Los Angeles, will present Tsabar’s work in Art Basel Miami Beach’s Nova section.

Rob Goyanes is a writer and editor from Miami, Florida. His work has appeared in Art in America, e-flux journal, Jewish Currents, The Quarterless Review, and elsewhere. He lives in New York.